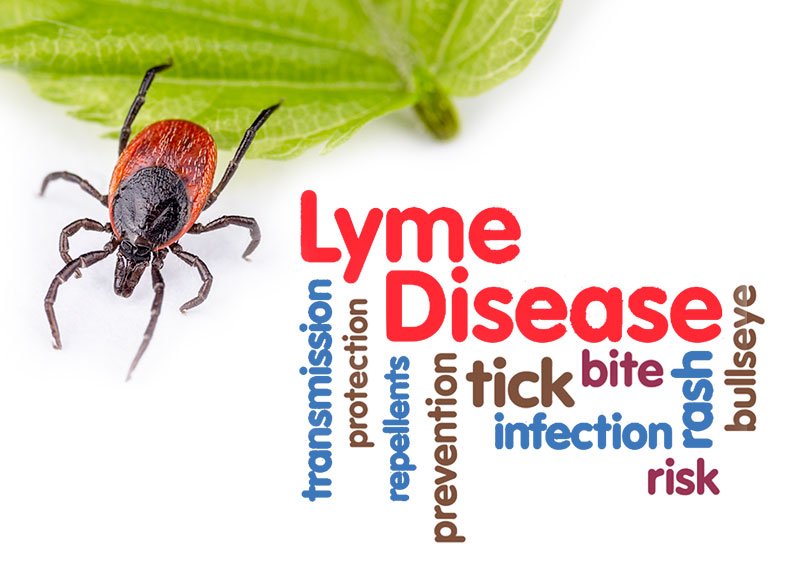 Ahh Spring!  A time of singing birds, blooming flowers, the trees bursting with green and ticks.  These nasty little buggers that like to hitch a ride, bury in and feed off of the dog, birds, deer and you!  The return of these small monsters also brings the chance of Lyme Disease.  We’ve compiled information to help you stay armed should they attack.

Lyme disease is the most vector-born infection in the U.S. and is the fastest-growing epidemic in the world. According to the CDC (Center of Disease Control), “there is a considerable under-reporting” of Lyme disease, maintaining that  the actual infection rate may be 1.8 million, ten times higher than the 180,000 cases currently reported each year.

Conventional belief attributes Lyme disease is caused by tick bites, but classical Lyme is caused by a bacterial spirochete, called Borrelia Burgdorferi. Recent studies have shown it can also be contracted by mosquitos, spiders, stinging flies, mites and fleas.

Borrelia Burgdorferi, the bacteria of Lyme Disease,  moves through blood and tissue by means of an internal arrangement of flagellae that propel it through the body like corkscrew. It can invade various body systems and remain dormant for long periods of time, only to rear it’s ugly head months or years later when the immune system becomes compromised.

Lyme spirochetes can travel through collagen tissue easier than through blood.   They are highly adaptable and can change from the spirochetal form to an encysted form where they can emerge from red blood cells when conditions improve. This is what makes Lyme disease so difficult to diagnose and treat.

Lyme disease does not occur alone but together with a number of co-infections. When the immune system becomes dysfunctional, the patient can becomes infected with a multitude of secondary, bacterial, fungal, micro plasma and especially viral infections

Fungus can also thrive in Lyme infected patients. The treatment needs to be broad based and address all the co-infections in order to succeed. The most insidious characteristic of Borrelia Burgdorferi is it can change shape and form.

HOPE FOUND IN A LYME STUDY

From September 2006 through December 2006, ten Lyme patients who had failed to improve with pharmaceutical treatments involving antibiotics and I.V. treatments were chosen to begin an alternative treatment for chronic Lyme disease.

In this pilot Lyme study, the ten patients in the natural treatment group were compared with ten other patients of approximately the same degree of illness who continued to receive conventional therapy.

Some study patients had to decrease the amount being take due to Herxheimer healing crisis which is caused by toxins being released by the large number of dead spirochetes and co-infections being eliminated during the initial part of the treatment.

When the RBC’s were crushed, the intercellular Lyme bacteria sprichetal form and cystic form were greatly reduced. The darkfield reflected the positive results that the treatment patients were experiencing.

So once again, nature knows what you need to stay healthy and eliminate the body of unwanted bacteria, microbes, fungus’ and viruses.