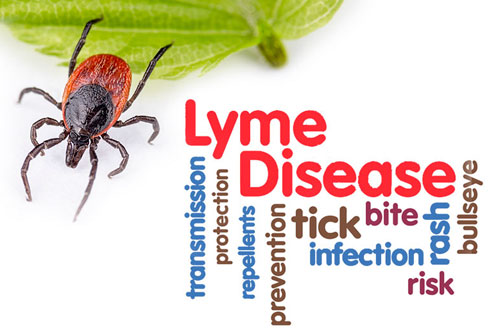 Conventional belief attributes Lyme disease is caused by tick bites, but classical Lyme is caused by a bacterial spirochete, called Borrelia Burgdorferi. Recent studies have shown it can not only be contracted by ticks, but also by mosquitos, spiders, stinging flies, mites and fleas.

Borrelia Burgdorferi, the bacteria of Lyme Disease, moves through blood and tissue by means of an internal arrangement of flagellae that propel it through the body like corkscrew. It can invade various body systems and remain dormant for long periods of time, only to rear it’s ugly head months or years later when the immune system becomes compromised.

Lyme spirochetes can travel through collagen tissue easier than through blood.   They are highly adaptable and can change from the spirochetal form to an encysted form where they can emerge from red blood cells when conditions improve. This is what makes Lyme disease so difficult to diagnose and treat.

Lyme disease does not occur alone but together with a number of co-infections. When the immune system becomes dysfunctional, the patient can becomes infected with a multitude of secondary, bacterial, fungal, micro plasma and especially viral infections

Fungus can also thrive in Lyme infected patients. The treatment needs to be broad based and address all the co-infections in order to succeed. The most insidious characteristic of Borrelia Burgdorferi is it can change shape and form.

The most common sign of infection is an expanding area of redness on the skin, known as erythema migrans, that appears at the site of the tick bite about a week after it occurred. The rash is typically neither itchy nor painful.  Approximately 70–80% of infected people develop a rash.

Months or even years later, joint pain and swelling may re-occur. Some have developed shooting pains or tingling in their arms and legs.  Despite treatment, about 10 to 20% of people develop joint pains, memory problems, and tiredness for at least six months.

Lyme disease is transmitted the bites of infected ticks. In the United States, ticks of concern must be attached for at least 36 hours before the bacteria can spread.  The disease does not appear to be transmissible between people, by other animals, or through food.  Diagnosis is based upon a combination of symptoms, history of tick exposure, and possibly testing for specific antibodies in the blood.  Blood tests are often negative in the early stages. Testing of individual ticks is not typically useful.

To prevent tick bites, wearing clothing to cover the arms and legs, and using DEET-based insect repellents can reduce the risk. Ticks can be removed using tweezers or other tick removal devices.

If an infection develops, a number of antibiotics are effective, including doxycycline, amoxicillin and cefuroxime.  Standard antibiotic treatment usually lasts for two or three weeks. Some people develop a fever and muscle and joint pains from traditional antibiotic treatment which may last for one or two days.  In those who develop persistent symptoms, long-term antibiotic therapy has not been found to be useful.

HOPE FOUND IN A LYME STUDY

From September 2006 through December 2006, ten Lyme patients who had failed to improve with pharmaceutical treatments involving antibiotics and I.V. treatments were chosen to begin an alternative treatment for chronic Lyme disease. For full study click here.

In this pilot Lyme study, the ten patients in the natural treatment group were compared with ten other patients of approximately the same degree of illness who continued to receive conventional therapy.

Some study patients had to decrease the amount being take due to Herxheimer healing crisis which is caused by toxins being released by the large number of dead spirochetes and co-infections being eliminated during the initial part of the treatment.

When the RBC’s were crushed, the intercellular Lyme bacteria sprichetal form and cystic form were greatly reduced. The darkfield reflected the positive results that the treatment patients were experiencing.

for all orders shipped
in the Continental U.S.